U.S. Precision Defense As you might guess, Benelli’s 12-gauge Performance Shop M2 3-Gun Edition was designed to serve as one-third of the competitive triad of...

As you might guess, Benelli’s 12-gauge Performance Shop M2 3-Gun Edition was designed to serve as one-third of the competitive triad of hardware used in 3-Gun events. Essentially a highly specialized version of the company’s great M2 inertia-driven autoloader, the 3-Gun has several features designed for enhanced speed and function.

First off, it’s got a large squarish plate you can slap quickly instead of thumbing around for the usual bolt release button, an enlarged and extended bolt-knob, a redesigned loading port for quad loading, an XS Express rear sight/green fiber-optic front for slug shooting and a spare shell caddy just in front of the ejection port.

I always get a kick out of using “tactical shotguns” for skeet. Despite getting the occasional fish eye from serious competitive types packing engraved over/unders, it’s invaluable for familiarizing yourself with the gun (full disclosure: My go-to skeet gun is an elderly Benelli M1 Super 90 Police Model). With a 24″ barrel and 6-3/4-lb. weight, the Benelli 3-Gun is reasonably short and handy. And it’s not all that tough to simply ignore the relatively unobtrusive rifle-type rear sight.

As far as aerial targets go, the big green front bead isn’t so much as an aid to “sighting” as it is to let you know if your head is down low enough on the stock so you don’t see a stretch of barrel/rib, ’cause if you do you’ll shoot high. Next to stopping your swing, lifting your head is the major cause of clay bird “ground breakage.” A tactical pedigree doesn’t mean the M2 3-Gun isn’t plenty sweet for skeet. But some people may stare.

Although aerial targets generally don’t figure into a 3-gun match as much as poppers and plates, we found the Benelli 3-Gun to acquit itself well at skeet and sporting clays. We used a mix-and-match collection of target loads, plus some premium Federal Hi-Bird 7-1/2s. Had we a bit more time, we might have even screwed in a trap-friendly choke tube and tried a bit of the game at the 17-yard line.

Although we weren’t using quad loaders, the redesigned loading port got rave reviews. Even stuffing shells in manually is a heck of a lot easier. If you’ve ever been on a high-volume Argentine dove shoot and gotten a severe case of “loading thumb,” you’ll appreciate this. We were less crazy about the enlarged bolt release. It appears to be an item best appreciated by a serious 3-Gun competitor. But since none of us operates at that level of speed, our main concern was to avoid hitting it accidentally once the bolt was locked open. The spare shell caddy likewise could best be appreciated by a competitor for quicker load switch-outs in concert with the magazine cut-off.

But shooting-wise, this thing’s a peach. The ComforTech stock allows you to enjoy the benefits of a low-maintenance inertia system without the pounding many guys opt for gas guns to avoid. And when you’re shooting slugs or buckshot, you want to lessen the pounding as much as you can.

We shot some vintage Hornady Black 00 and had no problems. For the buckshot we used the Full choke tube and switched to the Cylinder Bore for slugs. Competitive shooters are going to want to experiment with several tubes to find what knocks down poppers with birdshot best.

It’s usually best to try whatever buckshot you’re using out of several tubes — if you have them. The Full on the 3-Gun worked well for us, but there’s really no hard and fast rule about optimum buckshot constriction. You just gotta take the pounding and see for yourself what works best with a given choke tube in your particular gun. The right sights: Federal Tru-Ball 1-oz. slugs at 25 yards. And you’d be surprised at how well it did at 90 yards too. 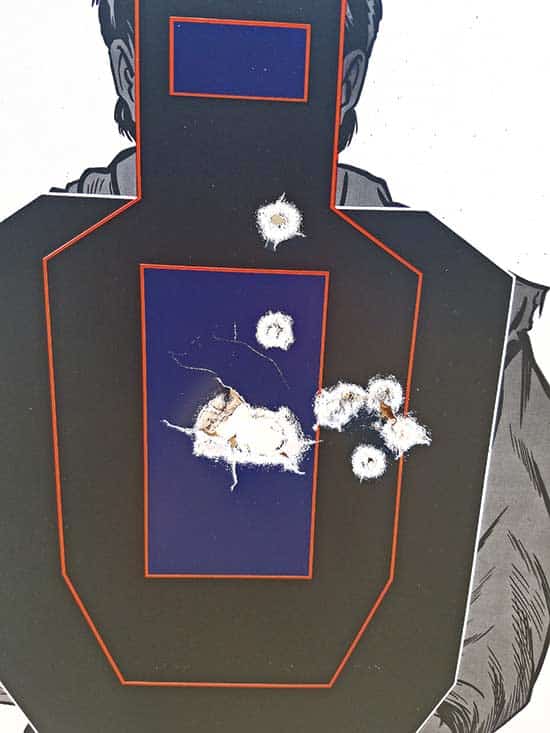 We shot Federal Tru-Ball 1-oz. slugs and the best groups at 25 yards were practically “one-holers.” At 50 yards we were still staying centered in a 12″x18″ Dirty Bird Silhouette Splattering Target. And it was no great trick to ring a slightly larger steel silhouette at 90 yards — the holdover is considerably less than you’d think. Would a ghost ring have allowed for more precise results at this yardage? Perhaps, but the XS Express/green fiber-optic front seemed plenty good enough.

We even tried a combo slug/buckshot approach with a couple rounds of Centurion Multi-Defense loads consisting of 6 pellets of No. 1 Buck and one scary .65 caliber lead ball. It’s a 2-3/4″ item, like everything else we used. All of us are well past the age where 3″ magnums hold any appeal whatsoever!

All in all, the Benelli 3-Gun is a fine — albeit specialized — item, although its usefulness extends well beyond the type of competition for which it was envisioned. At $2,499 it’s not inexpensive. What you get with it is a full set of flush-fitting Crio choke tubes (C, IC, M, IM and F), a shim kit, and a sturdy gray hard case.

quote of the day