U.S. Precision Defense Full disclosure: The first   Kimber   pistol I ever tested was the Compact Custom with a 4"...

Full disclosure: The first Kimber pistol I ever tested was the Compact Custom with a 4" barrel, shortened grip frame (Officer’s Model), bushingless barrel, beavertail grip safety and a set of night sights. It shot like the proverbial house on fire, so being unwilling to say goodbye to that pistol, I bought it.

Other Kimber models have come along that I ran through the wringer and they have all performed rather well. I generally hit what I was shooting at, rarely had a failure to feed or experience a stovepipe jam and when the shooting was finished, they stripped down, cleaned up easily and that was that.

I’m not a gun collector, though others might suggest I’m living in denial. So, when Kimber announced the introduction of its Raptor Collector’s Edition family of semi-auto pistols, it took a lot of self-control to leave my wallet where it was. But we can all dream, right? A Pack Of Raptors

If you’re not drooling yet, there might just be something wrong with you. But let’s take a look at each pistol one at a time — and we need look quick, because they’re only available for one year! The full-size 1911 is a real piece of work. At an overall length of 8.7", the pistol features a stainless steel, match-grade 5" barrel with full-length recoil spring guide rod below. The barrel is cut with a 1:16" left-hand twist for its .45 ACP chambering and makes use of a 16-lb. recoil spring.

The finish is pure eye candy, with the stainless black frame against the black and tan slide. The slide features Raptor scales fore and aft with a low-profile wedge titanium rear sight and a tritium front night sight, both dovetailed into the slide.

The trigger is of three-hole design, factory set with a pull between 4–5 lbs. All of my 1911 pistols have 4.5-lb. triggers, so this is right in my neighborhood. For those wanting a more compact sidearm with 1911-type features, the Micro 9 member of the Raptor series may be hard to put down.

At 6.1" long and weighing 15.6 oz. thanks to its aluminum frame, the pistol throws lead from a 3.15" stainless steel, match-grade barrel after pulling a trigger set at approximately 7 lbs.

Like its Collector’s Edition siblings, it wears a two-tone presentation with tritium night sights. It also has an exposed hammer and ambidextrous thumb safety. Chambered for 9mm, it carries seven rounds in a single-stack magazine. MSRP is $951. 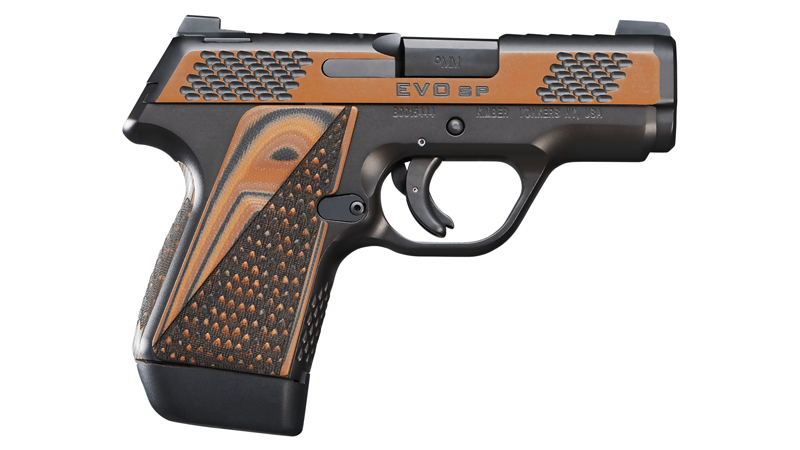 Despite being the only non-1911 design of the three models, the 9mm EVO SP Raptor is no slouch when it comes to being a looker.

Like the Micro 9, overall length is 6.1" with a 3.16" stainless steel, match-grade barrel that sports a deep crown and no bushing. Its aluminum frame weighs 19 oz. unloaded.

Made from premium aluminum, its trigger is set between 6–7 lbs. Standard tritium night sights are also included, as is a 7-round magazine. MSRP is $999.

Kimber has built a good reputation among shooters of my acquaintance, and the guns I’ve shot just keep working. If you can afford the Raptor Collector’s Edition, you not only have a solid shooter, but a unique gun sure to become a collectible.